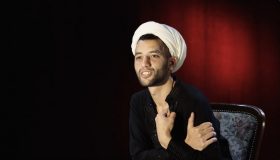 Mala Badi is a gender non-conforming performance artist, writer, and political activist from Morocco. Performances and writings arise from Mala’s personal experiences in daily life. Mala wants to increase the visibility of the queer and trans* North African, Imazigh, Muslim and refugee communities. Mala believes that decolonizing art is a necessary political act of affirmation of existence against the global attack and marginalization of the cultures, stories, and collective artistic work of POC and people from the south.